Settlement, conversion, organization (ca. 500 - ca. 1000). By crossing the Carpathian range and the Danube at the dawn of the Middle Ages, the Serbs and South Slavs in general enter their present homelands and the historical scene at large. At the same time, they are drawn into the complex process of establishing themselves, coexisting with their numerous neighbors, and maturing politically and spiritually.

South Slavs reach the Danube and make incursions into the Balkan peninsula, which they settle in the course of this century.

Caught by Bulgarians by deception, dies in banishment.

Bulgarian emperor Symeon, the most important ruler of the First Bulgarian empire, raises to throne.

Otto I the Great, king of Germany and first Holy Roman emperor. 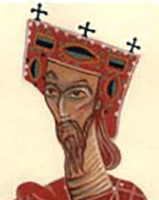 The preeminence of Zeta and the rise of Raska (ca. 1000 - 1168). The emergence of new geopolitical realities following the 11th-century decline of the Byzantine state leads to the rise of Zeta (Duklja) - the first Serb state with wider international recognition and more prominent cultural monuments. While not surviving the Komnenian Byzantine revival of the early 12th c., it was to lay the foundation for the rise of its more centrally located neighbor, Raska - hence the dominant Serbian entity of the Middle Ages.

Founding of the archbishopric of Ohrid (1019).

Founding of the archbishopric of Dubrovnik (1022).

The uprising of Macedonian Slavs under Peter Odeljan (1040).

The first Serbian king, under whom Duklja (later Zeta) was the first Serbian state to achieve international recognition, concludes favorable treaty with Byzantines (1052).

Insurrection of Mihailo's son Bodin and Djordje Vojteh in Macedonia (1072).

Bishopric of Bar elevated to archibishopric (1089).

Clashes with Byzantines in alliance with Hungary.

Battle between Serbs and Byzantines at river Tara, near modern Valjevo (1150).

The succession of several zupans on Raskan throne under Byzantine influence.

Establishment of the Nemanjic state as a Balkan power (1168-1321). The remarkable statesmanship and spirituality of the early Nemanjic dynasts - above all, the canonized trio of its founder Stefan Nemanja, the father of the Serbian Church St. Sava, and the "Holy King" Milutin - lay the foundation not only for a viable, prosperous and cultured medieval state but also for a national consciousness that was to survive long beyond it.

Founder of the Nemanjic dynasty.

Nemanja defeats brother Tihomir at the battle of Pantino (1170).

Nemanja accepts the overlordship of Byzantine emperor Manuel I (1172).

Nemanja attempts to conquer Dubrovnik and island of Korcula (1184), takes Duklja and town of Kotor, renews peace settlement with Dubrovnik (1186).

Serbian envoys in Nurenberg, negotiating with Barbarossa on the upcoming Crusade (1186).

Nemanja and Barbarossa meet in Nis as crusaders pass through Morava valley (1189).

Trade agreement between Bosnia and Dubrovnik, one of the first written documents in vernacular Serbian (1189).

Nemanja abdicates and withdraws as monk, first to monastery Hilandar, and later to monastery Studenica (1196).

Stefan was overthrown by his elder brother Vukan (1202).

King Radoslav overthrown by his brother (1233).

Second great voyage of Sava, who dies in Trnovo, Bulgaria (1236).

Turks conquer Jerusalem, now lost for ever for Christians.

Founder of the Kotromanic dynasty.

Dragutin abdicates following a hunting accident in favor of his brother Milutin at the council in Dezeva (1282) and retires to govern northern Serbia and Srem.

Serbs clash with Byzantines, reaching Hilandar and the Aegean (1283).

First assembly of the General states in France.

Beginnings of conflict between brothers Milutin and Dragutin (1301).

Milutin sends 2,000 warriors to aid Byzantines in fight against the Turks (1313).

Stefan revolts against father Milutin. Milutin wins and has his son blinded and sent to Constantinople (1314). Queen-mother Helen (Jelena) dies (1314) and king Dragutin (1316).

War between Serbia and Dubrovnik (1317).

Milutin's son Stefan back from Constantinople (1320). 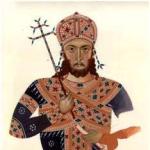 The Empire of Stefan Dusan (1321-1366). Reaping the benefits of an existing solid foundation, yet adding a statesman prowess all his own - Stefan Dusan, precedeed by his able father, elevates the Nemanjic monarchy to a dominant regional position. Territorial expansion is accompanied by major advances in legal codification, ecclesiastic organization and artistic expression.

The economic and political rise of Bosnia with the support of Hungary; conflicts with Serbia; Franciscans spread their mission.

Dusan takes the important city of Serres in eastern Macedonia and Mount Athos (1345).

Serbian church elevated to Patriarchy on Easter in Skoplje. Patriarch Joanikije crowns Dusan as Emperor of Serbs and Romans (Greeks).

Assumes, based on Nemanjic lineage, title king Stefan of Serbia in 1377.

Dusan sends embassy to pope Innocence VI, attempting to unite the Christian powers against the Turks (1354).

Dubrovnik rejects Venice and accepts Hungarian suzerainty. Power is divided between the Rector and three councils (1358).

Fragmentation of the empire and the arrival of the Ottomans (1366-1402). Despite efforts to maintain central authority within a modern and efficient state, Dusan's successors are unable to assert collective interests over the petty feudal ones - at the crucial point of the grave threat from an organized eastern invader. While the ensuing military showdowns were to mortally cripple the state, they also will have spawned a spiritual legacy that was instrumental in further shaping the national identity in the centuries to follow.

Crowned by Uros as a king and made co-ruler with great independence.

Despot Ugljesa, Vukasin's brother, rules the easternmost provinces of the Empire around Serres.

The battle of Marica (1371). Vukasin and Ugljesa move east to preempt Ottoman advance, but are defeated and killed.

Tvrtko I Kotromanic of Bosnia assumes royal Serbian name Stefan and is crowned king of Serbia in Mileseva.

German emperor Charles IV dies. The beginning of the "Great schism" in the Catholic church.

Lazar officially crowned as "Lord of the Serbs and the Danube, Stefan Prince Lazar, autocrat of all the Serbs" (1378)

The Battle of Kosovo

Hungarians under Sigismund raid Serbia from the north (1389).

Venice takes possession of Skadar by agreement with Djuradj Balsic.

The end of the Vidin empire (Bulgaria). Truce between France and England.

Dethroned Richard III: the end of Plantagenet dynasty in England.

The restored Despotate and its successors (1402 -1496). The Battle of Kosovo marks the traditional end of medieval Serbian statehood, but the 15th century saw a meaningful revival and unification of the land under the able Despots. While no longer a major regional power and wedged between the advancing Ottomans and opportunistic Hungarians, this state-managed nevertheless to produce lasting legacies in areas as diverse as the arts, legislation and chivalry.

Sultan Musa attacks Serbia. Reconciliation between despot and Djuradj Brankovic, who is declared heir to throne (1412).

Stefan picks Djuradj as successor at council at Srebrnica. Agreement between despot Stefan and Hungarian king Sigismund in Tati (1426).

King Sigismund recognizes Djuradj as the new ruler of Serbia and vassal (1427).

War between Bosnia and Serbia (1431-1433), Serbia gains control of Usora region including towns of Zvornik and Teocak.

Contract in Arasse, the end of civil war in France.

Hostilities between Serbia and Venice over coastal Zeta. Hunyady defeated by Turks in second Kosovo battle (1448).

Death of sultan Murad, return of Mara Brankovic to Serbia (1451).

End of Hundred Years' War. Fall of Constantinople, end of the Byzantine empire.

Turks conquer all of northern Serbia except Smederevo. Death of despot Lazar (1458).

Final Turkish attack on Hercegovina, fall of Herceg-Novi. Ivan Crnojevic returns to Zeta as semi-autonomous ruler (1481). Establishment of Cetinje as capital of Zeta and seat of Orthodox Metropolitanate (vladika).

The Spanish captured Alhambra, the final Muslim stronghold in Spain. Expulsion of Jews from Spain (1492).