The White Church of Karan

Bela Crkva Karanska (The White Church of Karan) is located near the town of Užice, and it is dedicated to the Annunciation of the Holy Virgin. The church was erected during the fourth decade of the 14th century and soon after adorned with frescoes through efforts of Župan Petar Brajan – the squire of King Dušan, his wife Struja, and their four daughters. The endeavor of this noble family was supported by several other donors, however, the only historical documents of their existence, as well as Župan Brajan’s and his family, are portraits painted in this church. The church is a domed, single-nave building with three bays, while its modest proportions are concealed by the later addition of the narthex. The facades of the Bela Crkva are simple, without any decorative elements, covered with mortar and whitewashed. Furthermore, the division of the internal space of the church gives an impression of a more elaborate structure, that is further reinforced by the frescoes, and the considerably lower floor level. 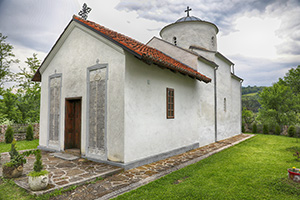 Bela Crkva houses a very well preserved sanctuary screen decorated with frescoes on both sides. In accordance with the dedication of the church, the extended cycle of the life of the Holy Virgin has also been depicted in the Karan church along with the usual iconographic program of wall paintings.

An outstanding feature of the fresco ensemble of Bela Ckva is the gallery of numerous portraits of historical figures. In the western bay, members of the Nemanjić dynasty – Saint Simeon, Saint Sava, King Milutin are represented, as well as the current ruler, King Dušan with his wife Queen Jelena. Next to the portraits of the royal couple is a damaged figure of a little boy who barely reaches up to King Dušan’s thighs, identified by some scholars as his son, the young prince Uroš. This hypothesis had lead them to conclude that the church was painted after Dušan and Jelena got married (1332), and after their son, Uroš, was born (1337). According to this interpretation, the frescoes in the church were completed before 1346, as the Greek lands included in the Serbian royal titulature in 1343, are not mentioned in the inscription accompanying the portrait of King Dušan.

Also, as the little boy is not painted in the costume of a young king, the wall painting of the Karan church must have been carried out before 1342/1343, the year he was promoted into this title. However, the recent reexamination of the terminus ante quem of Karan frescoes, as well as of the identity of the little boy supports the claim that the young prince Uroš could not have been depicted without nimbus. Thus, the young boy painted next to the king and queen is more likely to be a young page or sword-bearer.

Several other interesting and noteworthy portraits are painted in different parts of the church. In the founders’ composition, Župan Petar Brajan – with the Karan church in his hand – his wife Struja, and their four daughters, are represented in a quite prominent position facing the portraits of the Nemanjić family.

Unfortunately, the painters of Bela Crkva remain unknown. Their skills, however, indicate that they accepted iconographic and stylistic innovations of the time, and were well informed about contemporary cultural and artistic trends, which enabled them to create an elaborate iconographic program and to accomplish some distinctive and vibrant artistic solutions.

The White Church of Karan is located in the village of Karan, southwest of Serbia. It is only 20km from the major town of Uzice.