The history of Slavs in general, and their southern branch in particular, is largely clouded in mystery until the dawn of the Middle Ages - specifically, the early 6th century A.D. - and partially obscure for yet some centuries thereafter. Incidentally, it was the Slavic tribes later labeled as Southern - and presumably the ancestors of today's Serbs and Croats - that have, by leaving an earlier collective homeland (generally assumed to be somewhere between today's southwest Ukraine and eastern Poland), actually precipitated this change. By moving south, during the great Eurasian peoples' migrations, over the Carpathian mountain range, and into the lower Danube region, they finally came into direct contact with the Greco-Roman Christian Empire - the leading Euromediterranean civilization of its day, which left us numerous lasting records of these historical events.

To be sure, even in earlier times there are occasional references in ancient chronicles - starting with "the father of history" Herodotos (5th c. B.C.) - of various peoples at the edge of the "known world" or beyond, thought to be inhabiting areas between the Black and Baltic seas, and possibly representing or related to Slavs; but these accounts are usually vague or legendary, and typically use tribal denominations (e.g. Scythians and Sarmatians) very loosely. It is thus only in the 6th c. history of Procopius and his immediate successors, that Slavs emerge with that name and a definite historical identity.

Indeed, studying these writers at times reveals fascinating facts about Slavs and their traits - some favorable and others less so, and many apparently persistent even to this day. For example, Procopius states how "these tribes are not ruled by one man, but from ancient times they live in a democracy", and that they have public gatherings to decide on policy. They were not savage in any way, he describes and did not keep prisoners long in slavery - preferring to either return them quickly home for ransom or let them live freely amongst themselves. Emperor Maurice, on the other hand, in his famed military manualStrategikon, says how "they differ in opinion, so they either disagree or even if they can agree, many soon breach the agreement, as they are all zealously against each other and unwilling to yield to others." Their love for freedom has been often noted - as in the legendary sarcasm in reply to the Avar khagan's envoys: "Who is the man under this sun that might make us bow or succumb?" - yet paradoxically, this was also a key factor in precluding them from organizing a state or other structure capable of securing resistance and collective interests.

And so, having crossed the Danube-Sava frontier, they had entered the Byzantine Balkans for good. In the early 500s, these crossings were more in the form of raids and thus temporary, but towards the end of the century, the settling of various tribes becomes permanent. Ironically again, the lack of organizational structure proved to be also an advantage in the wars with the Byzantines, as there was no single tribe or leader to defeat, bribe or sign treaties with, to any lasting effect. This period is also marked by the initial incursions of the Asiatic warrior Avar tribe, interspersed with later Slavic ones; and indeed, here we see successive waves of arrivals, rather than just a single one. Thus, the main characteristics of this initial stage of South Slavic historical presence could be summarized as: permanent colonization of the Balkans, all the way to the Peloponnesus; loose tribal organization; often a subordinate position to the Avars; and shifting relations with the dwindling but still present Byzantine authority.

Early sources mention a formidable list of individual tribal names when referring to the arriving and settled South Slavs. Many of these seem obscure today, and many yet were merely based on the settled locale. However, some appear to predate the migrations; the most notable of these are those of Serbs and Croats, which over time were to encompass virtually all of the rest. The etymology of these names remains controversial; it is often claimed that they are not of Slavic, but Iranian origin, thus suggesting the hypothesis of the existence of separate Iranian tribes of these names, which in pre-migration times were pushed eastward into blending with the Slavs. Unfortunately, the first accounts that reliably mention these two names are only from the 10th c. AD on, and are often based on oral traditions of events long passed. The two key sources are De administrando imperio of emperor Constantine Porphyrogenitos, and the mid-12th c.Chronicle of the Priest of Dioclea.

According to Porphyrogenitos, Serbs originally used to live in what was called White Serbia (neighboring White Croatia) in present-day Poland; then, in the early 7th century, half the population migrated to the Balkans under the leadership of two brothers. There, after some indecision, they accepted emperor Heraclius' invitation to settle in a broad area of the central peninsula, called "Baptized Serbia" - probably in reference to early attempts to convert them to Christianity.

Early on, Serbs created several loose state entities: the region of Neretva (Pagania) between rivers Neretva and Cetina, with the islands of Brac (pr. brahch) and Korcula (KOR-chu-la); Zahumlje (ZAH-hoom-lye), between Neretva and Dubrovnik, with the island of Mljet (pr. mlyet); Travunija (trah-VOO-nee-ya; related to the town name Trebinje) and Konavle between Dubrovnik and Boka Kotorska Bay; Duklja (DOO-klya; later called Zeta, then finally Montenegro), between Boka and river Bojana (BO-ya-na); further inland, Raska (RAH-shka) and later Bosnia (between the rivers Drina and Bosna).

The state of Raska arose in the central and eastern part of what once was "Baptized Serbia", with its center being the walled town of Ras. From the early 11th c. it was under the rule of monarchs from Duklja (Zeta). Vukan - the family member appointed by king Bodin of Zeta to rule the province - assumed the local title of grand zupan, commanding all the local princes (zupans). During his long reign (ca. 1083 - ca. 1122) he managed - through a combination of military actions, timely (if often broken) promises and other diplomacy - to spin-off from the declining Zeta and successfully resist the Byzantines, occasionally expanding to the south and east.

By the 12th century, Hungary had gradually become an increasingly important factor in the Balkans, encroaching on nominally Byzantine possessions. Having incorporated Croatia in 1102, and shortly thereafter various parts of Srem, Dalmatia and Bosnia, it became a direct threat to the Byzantine state, which was, in turn, enjoying a centennial revival under the able Komneni dynasty. Under these circumstances, Raskan Serbia - wedged between the two - and her policies were conditioned by this broader context. This reminisced of the Bulgaro-Byzantine conflicts of 9-10th centuries, but with the Byzantine role reversed - now it was the closer, and thus more immediate foe. Generally bound by vassal status to Constantinople in peacetime, but quickly siding during wars with the Hungarian Arpad court (where family ties brought them considerable influence), and aligning ruling family feuds with foreign support - this pattern was repeated by the zupans of Raska throughout the middle part of the 12th century and the Hungaro-Byzantine wars. It was especially highlighted during open hostilities, like the conflicts of 1127 and 1150 - the latter ending with the battle of Tara, described by Greek chroniclers in epic terms, where Uros II and his Hungarian allies were defeated by Manuel Komnenos. This period saw the succession of three key grand zupans - Uros I, Uros II and Desa - and generally ends with the death of the last great Komnenos emperor, Manuel I (1180) - as well as the passing of the Raskan throne to what appears to be a side branch in the late 1160s. This new monarch, Stefan Nemanja, proved to be an extraordinary statesman, and founder of the most famous Serbian medieval dynasty. 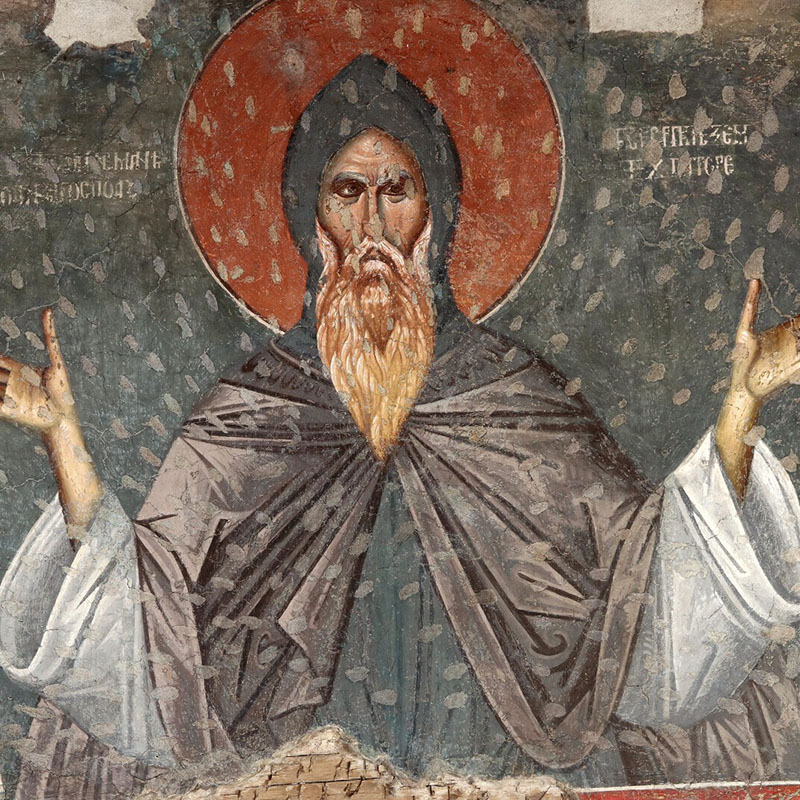 Nemanja's rise to power comes sometime during 1166-8, first from the appanage of Dubočica (city of Leskovac), in the shadow of his elder brother Tihomir - a Byzantine appointee - and together with the two other brethren, Straćimir and Miroslav. 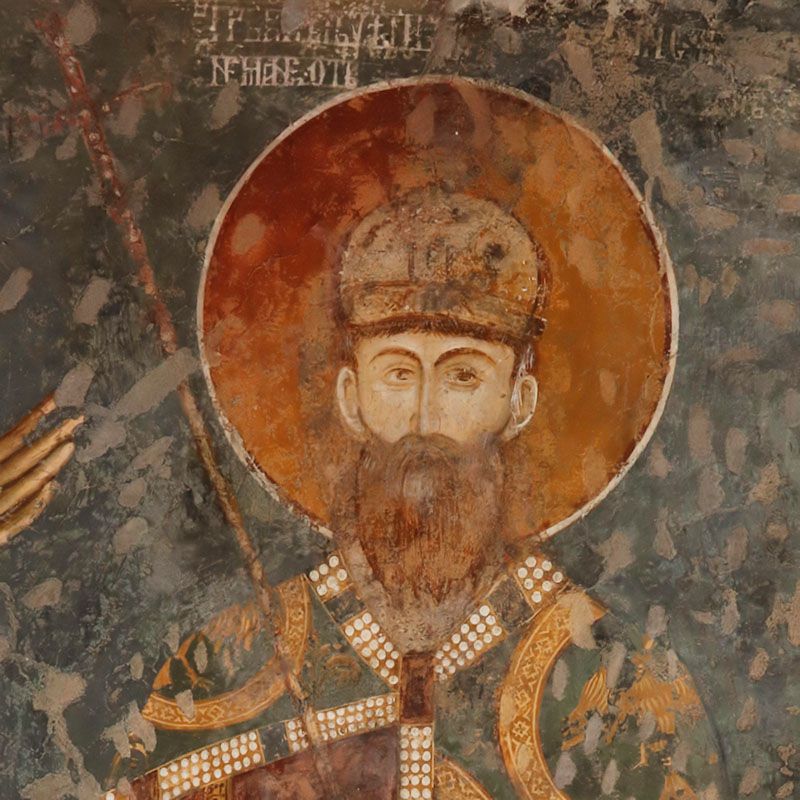 Navigating through the often troubled political waters of early 13th century southeastern Europe, Stefan managed during his reign of over 30 years to claim considerable accomplishments, having elevated the state to an internationally recognized and independent kingdom, and the church to an autocephalous archbishopric. 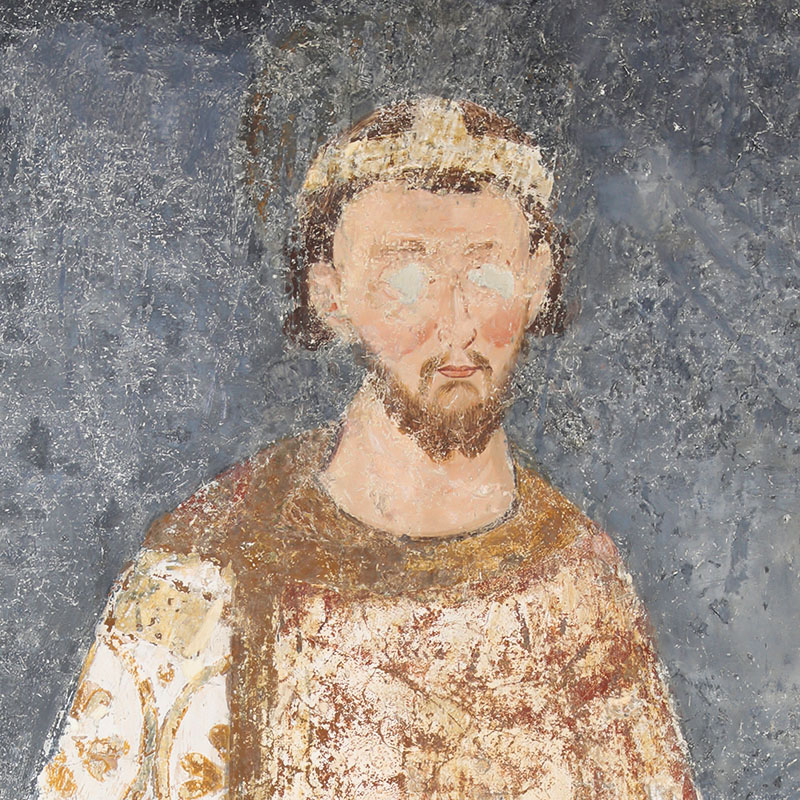 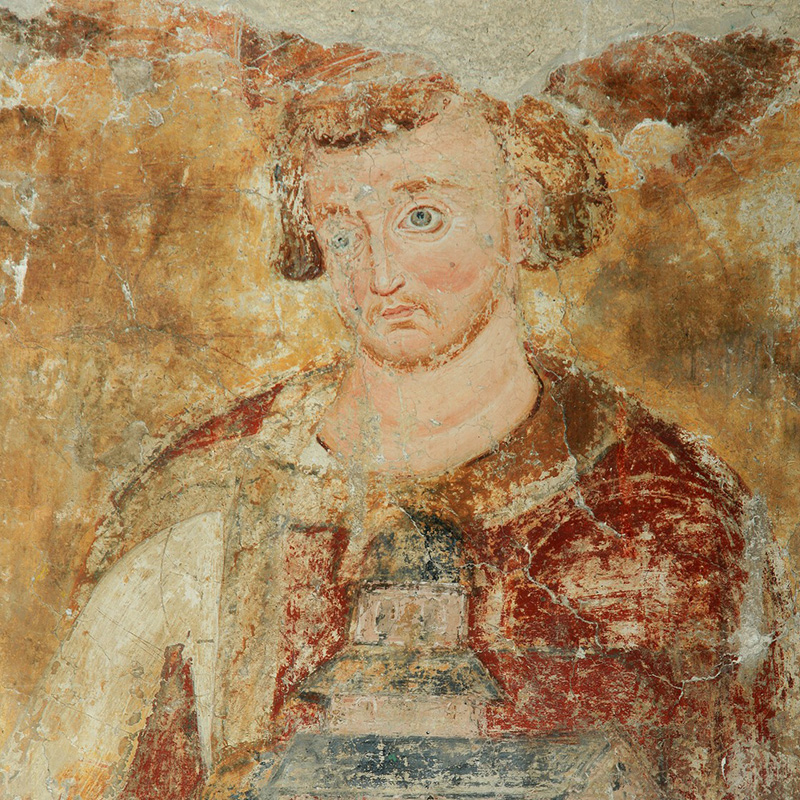 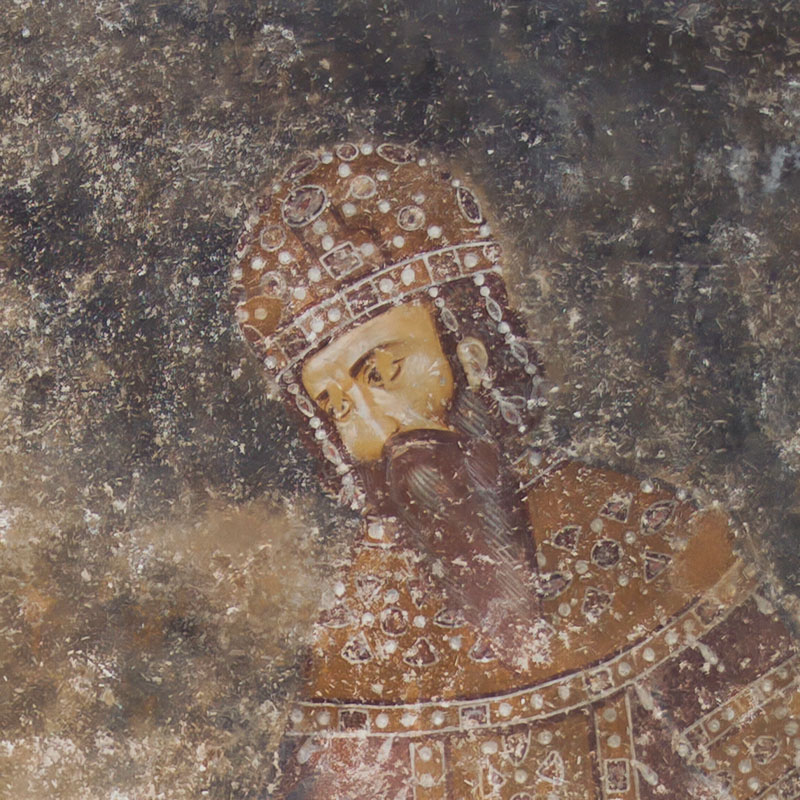 The third son of Stefan Prvovenčani in a row to take the Serbian throne, Uroš I (pr. OO-rosh) appeared to have been the ablest of them all, and in any event - his rule was longer, more stable, and ultimately more prosperous than those of his elder brothers Radoslav and Vladislav combined. 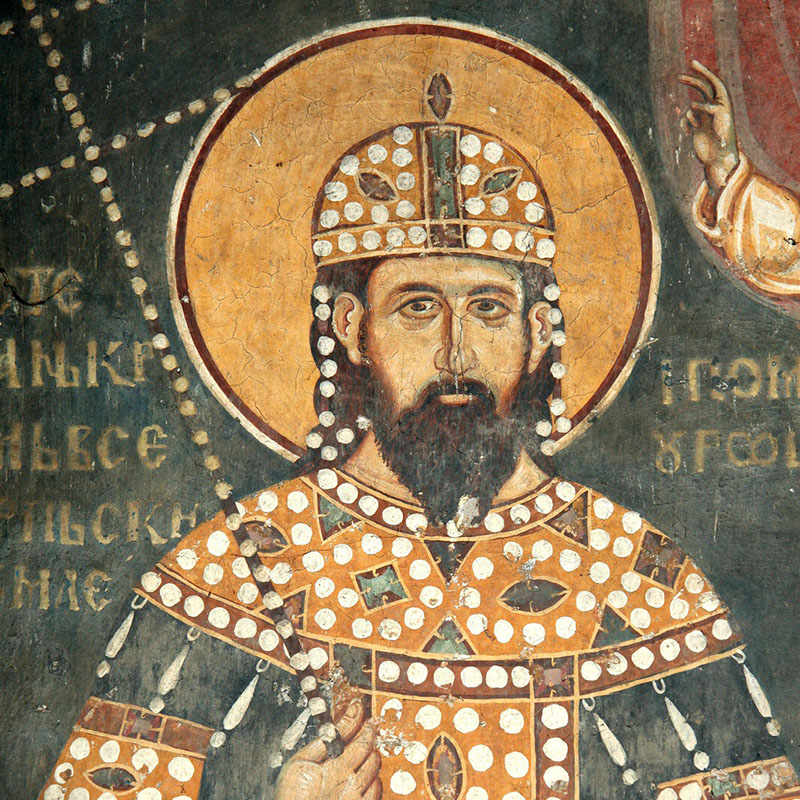 Apious and honest man according to his biographers, Stefan Dragutin (pr. drah-GOO-tin) was always troubled by the shady circumstances surrounding his assumption of power from his father. Consequently, he took a broken leg in a hunting accident six years later as a divine warning and serious bad omen, which coupled with some other factors, led to the council at Dezevo and his effective abdication in favor of younger brother Milutin (1282). 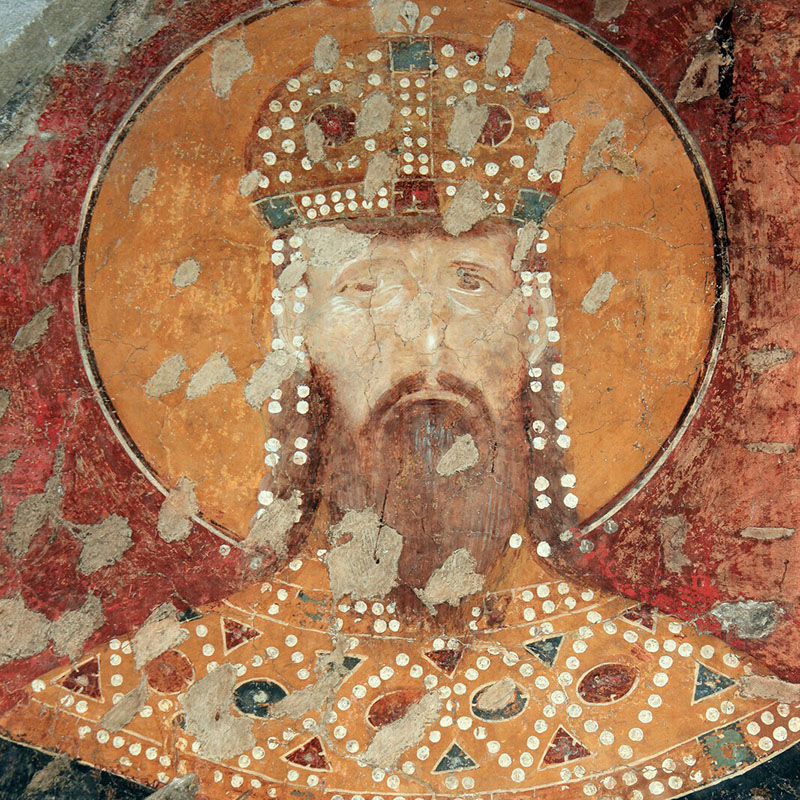 The long reign of one of the most illustrious and powerful medieval Serbian figures - the "Holy King Uros", (Milutin by given vernacular name; pr. mee-LOO-tin) - marked the elevation of Serbia to a dominant Balkan position, and saw cultural and economic prosperity and advances along many lines. 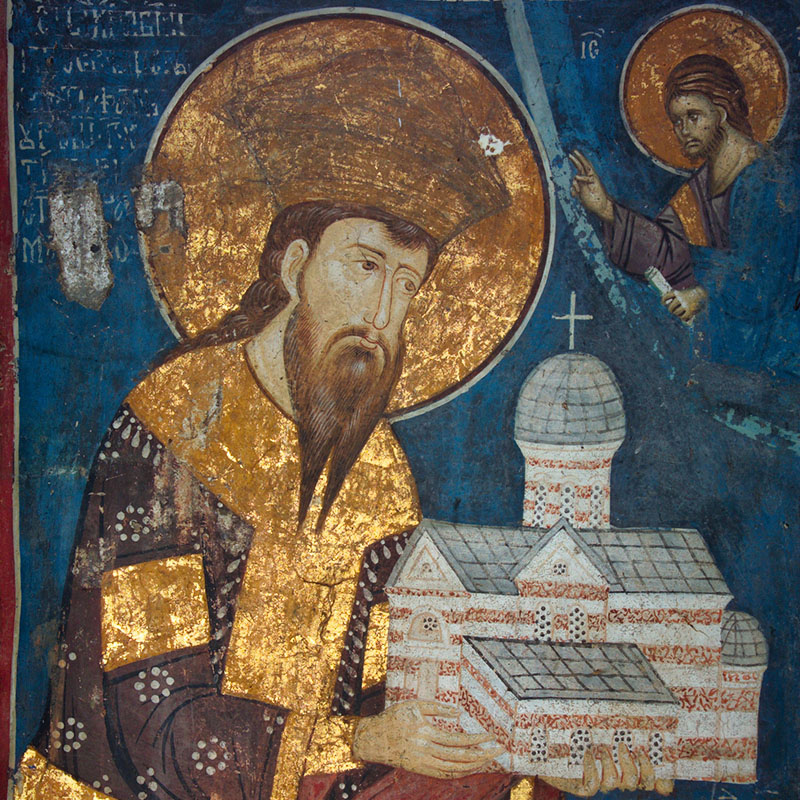 Stefan's pious demeanor and life of considerable hardship made him a martyr in the eyes of the Church, and he was later canonized; his feast day is Nov. 24 (11 by Julian calendar), and in the gallery of patron saints of Serbian families (Krsna slava) he is also represented. His main endowment is the famous monastery of Visoki Dečani, in western Kosovo, dedicated to Ascension of our Lord (completed later by his son Dušan), after which he has been referred to as Dečnski. 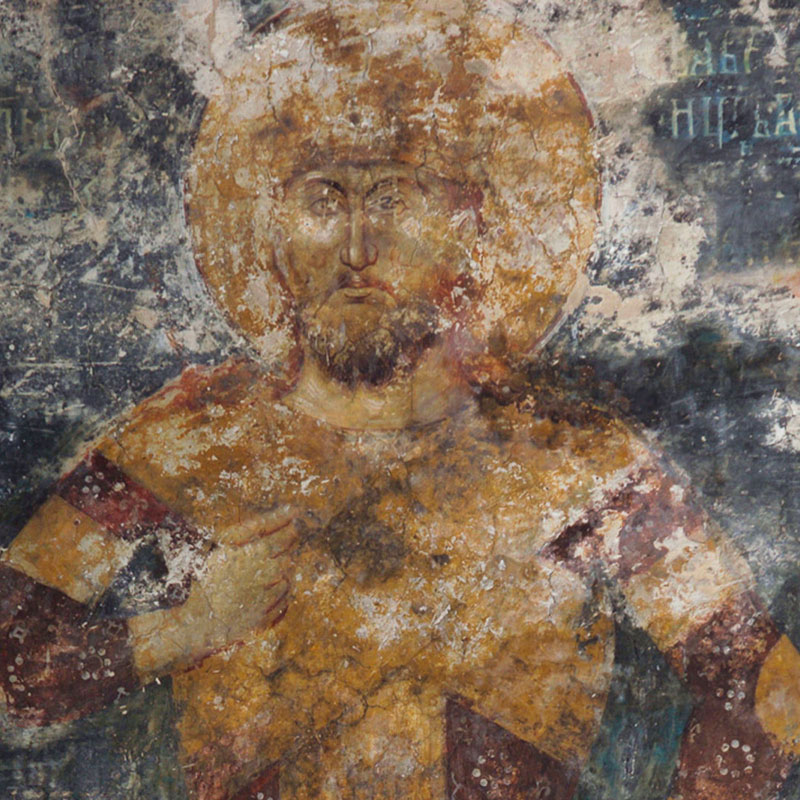 Stefan Dušan (pr. DOO-shan) can be considered the most important conqueror and statesman in Serbian medieval history, but his character, due to limited evidence, is still relatively unknown for the reign of a quarter-century and such stature. During his rule, the medieval Serbian state reached its zenith.

Emperor Uros (pr. OO-rosh) was forced to take the Serbian throne at the age of 18, following his father's unexpected death. Known in the epic tradition as Uros "the Weak", he was not capable of keeping his father's empire intact.

Placed appropriately at the very twilight of the official Middle Ages, the Zeta/Montenegro of the last Crnojevic dynasts is also the final chapter of medieval Serbian statehood. As was the case with other Balkan Christian nations to varying extents, the Serbian state (along with its offshoots) was unable to maintain a continuity of its institutions, and consequently the viability, necessary to physically resist the onslaught of an organized and vibrant invader. It did, however, manage in many ways to sow the seeds of genuine national continuity and resilience that were eventually to bear fruit. In the centuries to come, some of the finest epic poetry and purest tradition were preserved in the isolated mountains of Montenegro, and invaluable Serbian literacy and historiography was cherished in the hybrid city-state of Dubrovnik. Still, the main activity in preserving ethnic identity and continuing the liberation struggle was to take place in Hungary (later Austro-Hungary) and the central Ottoman-occupied Serbian provinces, straddling and often right at the turbulent military frontier of the two empires, and leading eventually to the beginnings of modern Serbian statehood at the dawn of the 19th century.