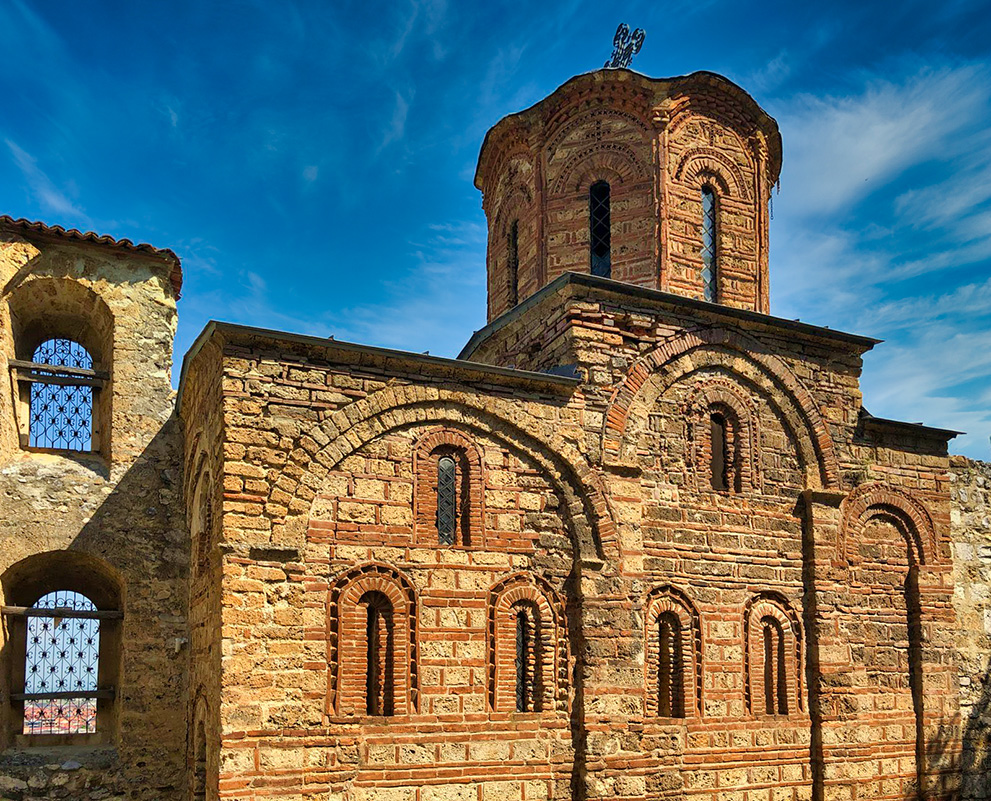 At the foot of the Prizren fortress Kaljaja, on a plateau with a view of Prizren, is the Church of the Holy Savior, the endowment of the Prizren noble family Vladojevic. The church is first mentioned in the founding charter of Emperor Dušan issued to the monastery of the Holy Archangels near Prizren (around 1348), which, among other things, states that the Holy Savior and all his estates, with the consent of the lord Mladen Vladojević and his mother, are attached to Dušan's endowment, as they are exchanged for the church and estates in Ohrid. The mention of Mladen's family in the charter and the emphasis on his patronage, which he had to inherit from his father, suggest that the Church of the Holy Savior could have been built during the second or third decade of the 14th century.

The church is a single-nave building consisting of an altar space, a nave, and a narthex. Outside, it is articulated by arcades resting on the shallow pilasters. The apse of the church is semicircular on the inside and three-sided on the outside, while the eight-sided dome above the nave is placed on a cubic pedestal, as wide as the nave of the church. The narthex, almost square, is covered with a cross vault. The church is built of alternating rows of stone and brick, and the ceramic-plastic decoration and jagged bricks frame the openings and emphasize the wreaths.

The builders of the Church of the Holy Savior belonged to one of the masonry workshops in Prizren, that gained experience and knowledge alongside the Greek builders from Epirus who restored the Mother of God Ljeviska. This is confirmed by the construction technique and some architectural solutions applied to the small Church of the Savior, of course, in much more modest forms, which have their foothold in the monumental architecture of the Prizren Cathedral.

The original layer of painting was created in the second quarter of the 14th century and has been preserved in the altar space. In the first zone of the northern part of the triumphal arch, Christ the Almighty is depicted on the throne, and in the apse, the Liturgical Service of the Church Fathers. Above it is the Communion of the Apostles fresco that belongs to the second layer of painting, also from the 14th century. The largest part of the preserved painting of the Church of the Holy Savior originates from that second phase. The apse depicts the Virgin of Light with Christ the Infant, on the triumphal arch are the Annunciation and the Descent of the Holy Spirit on the apostles, in the vault of the altar is the Nativity and Ascension, while the Assumption is on the south and the Descent into Hell on the north wall of the altar space.

Verses 19 and 21 of Psalm 102 are written around the figure of Christ the Almighty in the dome, and below that inscription, the Mother of God is surrounded by tetramorphs and angels, while in the lower part of the dome are the verses of the hymn You are truly. Eight prophets are painted in the tambourine, while the representations of the evangelists in pendants are only partially preserved.

In the higher zones of the nave, scenes from the cycle of the Great Feasts and the Passion of Christ are painted. In the zone of separate figures in the nave, the representations of St. Demetrius on the south wall and two archangels on the west wall have been preserved. The figures of the Mother of God Paraklis and Christ the Almighty, as well as the remains of the play of St. John the Baptist, in the narthex also date from the 14th century but are the work of another painter.

During the Turkish rule, the Church of the Holy Savior was abandoned, and in the middle of the 18th century, the Turks gave it to the Cincars who moved to Prizren. In 1836, they started the construction of the ambitiously conceived church of the Holy Trinity around the existing church, which was never completed, and from which the walls surrounding the church port remain today. In the 19th century, frescoes from the 14th century were covered with new frescoes; during the conservation and restoration works of the 1950s and 1960s, these frescoes were removed and arranged on the walls of the church where there was no preserved painting.

The Church of the Holy Savior was set on fire and severely damaged in the March riots in March 2004, and in 2010 conservation and restoration works were carried out.

Category: Cultural goods of exceptional importance Ordinal number in the central register: SK 1401 The basis for entry in the register: Decision of the Institute for the Protection and Scientific Study of Cultural Monuments of the People's Republic of Serbia in Belgrade no. 1598 of September 27, 1948. General Law on the Protection of Cultural Monuments and Natural Rarities (Official Gazette of the Federal People's Republic of Yugoslavia No. 81/2).
LITERATURE