Stefan Dusan (pr. DOO-shan) can be considered the most important conqueror and statesman in Serbian medieval history, but his character, due to limited evidence, is still relatively unknown for the reign of a quarter-century and such stature. The medieval Serbian state reached its zenith during his rule.

Oddly, although his military prowess was well-known from the battle of Velbuzd where he skillfully commanded mercenary archers instrumental to the victory of his father's army, his vast expansion at the Byzantine expense was accomplished without major warfare or open-field battles; rather, it appears more as an opportunistic - or wise - exploitation of circumstances that were in his favor. However, once in charge of these new territories, Dusan acted with a sense of responsibility and organization; this ambitious undertaking was ultimately undermined by his premature death.

Responding to the wishes of the restless feudal lords, the young king undertook several successive attacks on Byzantine territories (1334, 1341-1345, 1347-1348). These Serbian victories helped fan a new Byzantine civil war. During the conflict between the minor emperor John V and his regent, John Cantacuzenus, old rivals Venice and Genoa interfered as allies on both sides. Furthermore, supporting Cantacuzenus, the Ottoman Turks saw their first European action and plundered Byzantine dominions.

Dusan took the remaining Macedonian towns, with the exception of Thessaloniki, and all of Albania with the exception of Durazzo (Drac). Finally, he entered the important city of Serres and obtained extensive parts of Greece - Epirus and Thessaly - as far as the Gulf of Corinth. The Serbian state attained its greatest expansion, reaching the Adriatic, Ionian, and Aegean seas. The conquests assuaged the appetites of the lords, and Dusan began thinking along the lines of restoring the glory of the largely defunct empire under his rule. As soon as he had taken possession of Serres, the Serbian king styled himself the "master of Romania" (Byzantium), and by the end of 1345, had proclaimed himself Emperor of the Serbs and Greeks ("Romans" - as the Byzantine state was still nominally the Eastern Roman Empire). With the approval of the patriarch of Trnovo (Bulgaria) and the (Byzantine) archbishop of Ohrid, he elevated the archbishop of Pec to the rank of the patriarch and - with them performing the ceremony of investiture - had himself crowned emperor in a solemn ceremony, at a synod in Skoplje on Easter of 1346. Although the imperial title no longer reflected the desire for universal power, it did reveal the plans of the Serbian ruler to impose his mastery on the empire. After fresh victories and territorial expansion, Dusan appealed to the Venetians for help to conquer Constantinople by sea, but these went unanswered.

The Western states were in no mood to sustain his program, and they continued to call him king rather than the emperor. Dusan's plan to form a coalition against the Turks and his negotiations with the Pope at Avignon to get himself appointed "captain" of the Crusaders also bore no fruit, although - in a move so typical of medieval East-West political maneuvering - he did promise a union of churches in the process. The Hungarian king was the first to offer resistance. And when Dusan's achievements were interrupted by his untimely and mysterious death, there still remained the anathema pronounced by the Byzantine patriarch against the new emperor, patriarch, and the new church functionaries - meaning the very people who were the standard-bearers of Serbian state ideology.

Dusan, for his part, did behave like a Byzantine emperor. State synods, attended by eminent lords, no longer discussed sacred and secular affairs as they had previously, but simply acclaimed the emperor's proposals and laws. At the state synod in Skoplje, in 1349, the Code of Laws was published and was supplemented later by new provisions in 1354. Dusan's aim was to unify legal practice and to buttress the positions acquired by the Church and the lords. The decree demonstrates that the lords and state functionaries frequently abused their rights to the detriment of imperial authority and stable feudal order. New provisions were needed to prevent the uncontrolled movement of dependent people on the one hand, and on the other to put an end to the lawlessness of the arrogant lords and the abuses of unconscientious judges and state functionaries. As a result, Dusan's state was to an extent a dual monarchy - a kingdom for the Serbian lands and an empire for the Greek lands - each with its own administrative system, though both with unified institutions at the top level. Notably, there were even two chancelleries, each under its own logothete (chancellor), one each for Slavic and Greek documents.

Apart from having completed the Visoki Decani monastery of his father, Dusan left numerous endowments, the main one being the Monastery of the Holy Archangels in Prizren, where his earthly remains rest to date. Several of his portraits have survived in good shape, and they reveal - particularly the famous ones from Lesnovo and Decani - a forceful and energetic gaze, ever so slightly tempered by a melancholic note of the spiritual. And although slightly tainted by the fact of its rather quick disintegration, the empire of Stefan Dusan remains the apogee of the medieval Serbian state, and his endeavors a source of inspiration for many generations since. 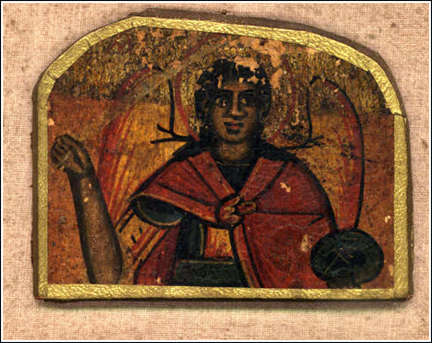 St. Archangel Micheal on a 16th-century icon. Folk tradition asserts him being the family patron saint (Krsna slava) of Czar Dusan - and thus of the Nemanjic family - in a charming epic poem where the Archangel scolds Dusan for not following proper rites of the feast. Historically, the patron of the dynasty and throne was St. Stephen the Archdeacon, whose image appears alongside the kings on early Nemanjic monetary issues; the use of the titular royal name Stefan is believed to stem from this patronage as well.