Save the White Angel, Diary 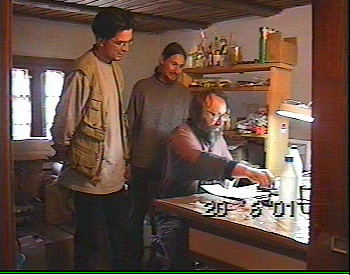 Greetings from Belgrade, although I should do it from Mileseva. With two associates, I settled in the old dorm. The first working week is already behind us. The weather conditions were not favorable for us, but we managed. It rained non-stop for three days so we were forced to a different rhythm. However, I organized a workshop. The warehouse space, a small workshop for rehearsals and testing of materials used in the painting and conservation process, etc. were arranged. Bad weather conditions forced us to dedicate ourselves to these contents. And they are necessary. As soon as the sun rose, we used it to review and select the elements for the scaffolding. God willing, we'll start lifting later this week.

Tomorrow I'll ask someone at the SUC office to give me an emblem or trademark to hang on the scaffolding. I thought I was printing myself, but in the Department, our color printing broke down. I think it would be nice to see who the sponsor is, at least on the video. To stay in the church longer I will have to ask the bishop for permission. In professional terms, I have consulted with my technologist on many issues. If there is a possibility and it is not a great burden and obligation, the book would mean a lot to us:

For now, thank God, everything is under control.
Until the e-mail contact again,
greetings and gratitude from
Mija.

Greetings from the Last Supper level!

Although we had a lot of rainy days, which prevented access and use of elements for the scaffolding, on Saturday we "reached" the level where the fresco with the display of the Last Supper is.

The accompanying difficulties are not important, it is important that we have achieved the foundation of the scaffolding and now we can only fine-tune it. Next week we dedicate to "finer" conservation content. Nenad, do you insist on photos or recordings like this, which were extracted from the videos? I intend to take a photo as well, but for now, I didn't think it mattered that much, because it's actually a "simple scaffolding". When I start working in more detail, then photography will follow.

Nenad, I am glad that you support a quality job. I will give everything to be done that way. Of course, the number one conservation rule is that no harm should be done. That is the most important thing and no reason can be ahead of that.

This week I asked for Mrs. Novka Ilic twice, but she was on a business trip to Bg. For now, there was nothing interesting as possible material for the recording. However, I wanted to tell her that and see if she has a concept, a deal. I keep a video diary, so we have that type of material. It remains open to working on that as well. This week I will have to take a short, urgent trip, while the associates will work on finer preparations for the future.

Thank you so much for the book.
May Heaven keep us in harmony. 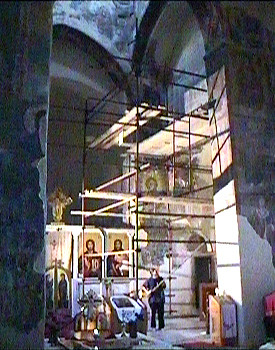 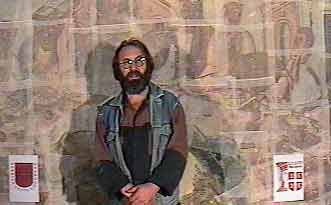 God be with you!
Hello everyone!

Although there is a slightly longer financial drought here, the work is essentially not standing. This week we removed the protective patches and the Savior's Secret Dinner-as the full name of the painted display is now in full beauty before us. We are currently working on thorough documentation and preparations before laying new stronger layers that should ensure its safe separation and descent. I am also sending a few shots for credibility. May the sky encourage us, give us strength and success.

Blessed is he who is in the Treasure! 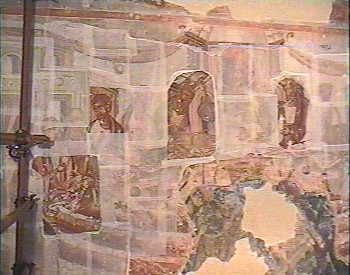 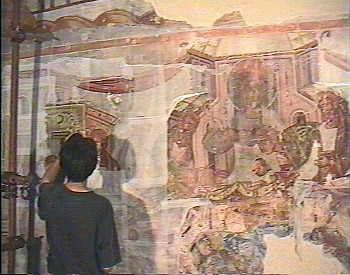 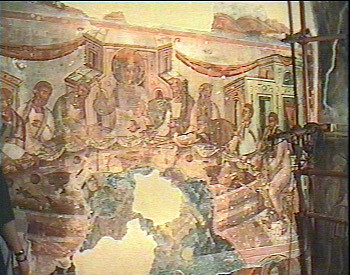 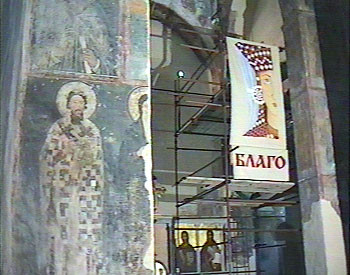 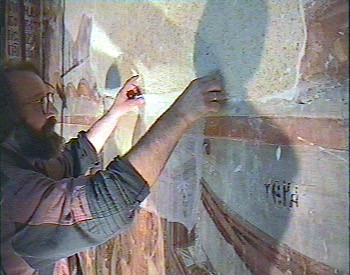 God be with you!

The past week was full of real conservation content - a fight for every hot and dry day. Namely, since the weather was mostly dry and very warm, we used to install as many as four reinforcing, supporting layers. Normally, all preparatory work and documentation work have been done before that. Now the fresco has been taken care of and is waiting for the next phase, God willing, -separation. Until then, preparatory work again. The atmosphere in the team is good, with the proviso that I sometimes "subdue" it so much that it's too hot. It was very cold this weekend and the humid conditions would not allow this phase of works to be carried out - which we have done so far.

She was a TV crew (correspondent from Nova Varos for RTS) and I gave a little statement. It was said that the report would go to the first or second TV news on Tuesday. On Friday, at 9 am, there will be a longer report in the show "I to je Srbija". If something isn't right, you'll forgive me, I'm a better worker than a speaker.

Lots of greetings from Mija.

It's been a long time since I wrote ... Although I complained last week that the connections were bad, this provider hasn't improved anything until this one ... But that's not a reason to worry about work. It is in full swing and we have done almost all the preparatory work for the separation of the Last Supper. In the coming time, we will start with separation, so what can God give us! The only thing is that I can't send a few more photos because the connection is usually stuck. Due to the good rhythm in Mileseva, I do not have the opportunity to come to the SUC office every Monday to unload a larger amount of recordings.

The other day, there was an RTS team and a report was recorded that went on the main news programs. I haven't watched so I don't have a real judgment on it. My only fear is that it is not something immeasurable, so sensational as a journalist. Last week, I reassembled the scaffolding and glued the last protective layer. Now it only takes time to be dry. Then optimal conditions for further work will be created.

Good luck to us all! 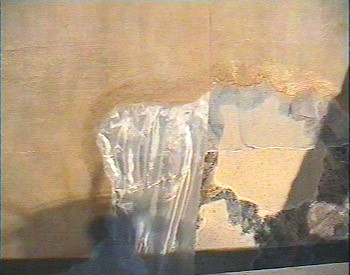 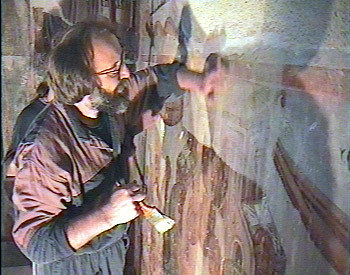 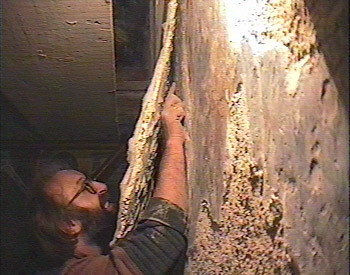 I was more than happy to hear that the book had arrived in Belgrade. It also coincided that during the past week there was a lot of interesting content on "our" side. The support for the Last Supper has been completed - in fact, its future temporary carrier. By the way, I had to work a little on its separation in order to test all the conservation procedures so far. Since everything went according to the imagined scenario, the bracket had to be lifted and placed over the secured face of the fresco. For that maneuver, we had to completely recompose the scaffolding - so that it could rise up to 7 meters. More precisely, a rhomboid-shaped metal cage was made and a support was erected on Friday.

From Sunday, we start with the most important and crucial procedure. God willing, everything will end nicely.

I intend to stop by the SUC for a book and "unload" new recordings, on Monday. Many thanks for all the support in the professional segment (on the book).

Greetings from the people of Milesevo led by Mija.

May God bless us all!

Permanent strengthening of the base - October 1, 2001

After the back of the Last Supper was strengthened, a reinforced, multi-layer polyester carrier was made.

However, before the installation of this girder due to the effects of shear forces - observed for a longer period, wire reinforcements were made, which more strongly connect the preserved structure of the wall painting with the new girder, which replaces its wall. A layer of insulation is glued in between.

After making the supports, we straightened the wall painting and separated it from the supports (in the picture).

This was followed by patient thawing and removal of the protective layers from the face of the wall painting by means of which it was separated from the wall (details 244 and 246).

For St. John, the team climbed Titerevac (the hill above Milesheva) and raised the Serbian flag, which was knocked down by the storm!
Image 246 shows the condition of the left side of the wall painting after removing the protective patches. 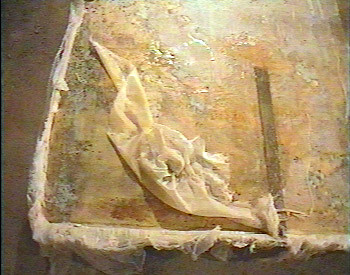 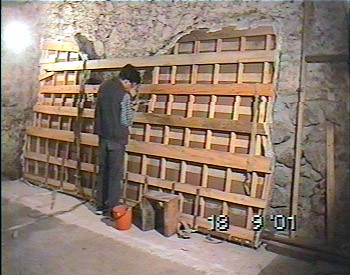 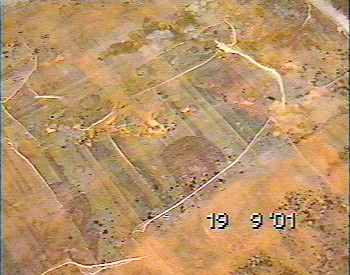 I'm only calling now since I'm convinced that everything is fine! I didn't do it out of doubt, but out of not "embarrassing" ourselves on the most sensitive jobs and in the "finishing" phase. Since it was confirmed by the administration, I had the courage to seek the bishop's blessing for the works on the White Angel. Until then, I was not allowed to do that. For tactical reasons if by any chance I can't finish the job I started. The blessing has come. I did all the necessary work in the "urgent" places during the previous days. Glory to God!

What is most often apostrophized as "carelessness" is now taken care of. On the sleeve of the left hand, on the decoration, the appearance of falling off parts of the painted material (stratification) was stated. The occurrence of larger - visible damage. All parts of the painted material are "fixed" (reinforced). The material that was "missing" was upgraded. Painting-conservation retouches and necessary toning were performed. Painting and conservation procedures are almost completely reversible. A partial presentation of the parts were made, as well as the procedures that needed to be done immediately after the discovery of the White Angel. Heaven has rewarded us to do it together, now. It is about the edge of the layers of younger frescoes.

Now everything is under control, long-term patient works are ahead. The works on the Last Supper are in the final phase - presentation. Over the past week "for the second time, she is upright." 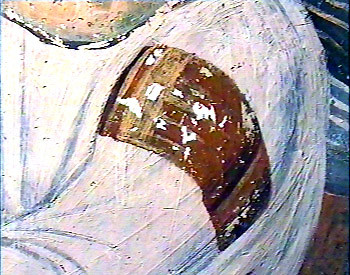 The centuries-old existence of a people and its cherished relics on the fresco walls have seen times both trying and rewarding. We are blessed to have been both witnesses and agents to a transformation whereby the countenance of our Holy Father, St. Sava, shines with a renewed glow and brilliance, as do those of all the Nemanjic statesmen.

The centuries-old existence of a people and its cherished relics on the fresco walls have seen times both trying and rewarding. We are blessed to have been both witnesses and agents to a transformation whereby the countenance of our Holy Father, St. Sava, shines with a renewed glow and brilliance, as do those of all the Nemanjic statesmen.

It is a distinct pleasure to claim that such an important task has been brought to successful completion while realizing we are a rare generation empowered to see images of the holy dynasts as they appeared at the time these sacred walls were first painted.

Though less in scope, the subtask of conservation of critical fresco portions has been also completed as planned. Fundamentally, the potential erosion of the vulnerable material has been arrested and checked. The most sensitive structural parts have been strengthened, and the encrusted surface deposits of various origins removed. The cleaning allowed the color palette to restore its original values, and some presentation solutions have been replaced by more appropriate alternatives. Furthermore, this project also opened some new theoretical issues in the domain of fresco restoration and conservation, serving in the process as both a vehicle for students' academic advancement and a springboard for expanded future work.

A sincere love of treasures transcending the divide between spiritual and material, coupled with a professional attitude and exemplary teamwork - together all brought this project to fruition, along with the understanding that a worthwhile task was performed not only to the benefit of the Serbian national heritage but to the enrichment of world civilization alike.

[ Shown on the left are details from the monastic robes of St. Simeon the Myrrhflowing, now visible for the first time in centuries, following the removal of encrusted surface deposits.] 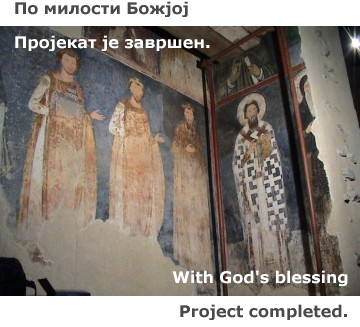