Excerpts from the book: "1808/1918 Serbian Military Uniforms"
By Pavle Vasic

A uniformed Serbian militia is mentioned at the end of the seventeenth century after the siege of Vienna in 1683, but no details are known of its dress. It can be supposed that it derived from national costumes like the uniform introduced at the end of the first half of the eighteenth century. In the thirties on the initiative of the metropolitan Vikentije Jovanovic, a Serbian Hussar Regiment (1735) was formed which did not survive long. Nevertheless, there are references to their dress: saber, carbine, and two pistols with green dolman and red breeches. Frontier regiments were uniformed in 1744 and this uniform had certain Hungarian traits until 1767 when it was tailored in the style of the Austrian infantry. This is retained until the Military frontier was abolished in 1873.

The Christian Heritage of Kosovo and Metohija

This book on Serbia’s Christian Heritage in Kosovo and Metohija, its heartland in medieval times and through Ottoman domination, is intended to introduce to a wide reading public the oldest and richest treasury of Serbian medieval history and culture. Its authors are leading specialists in the fields in which they write, so readers may place complete reliance on the factual accuracy of the material.

The History of Serbian Culture 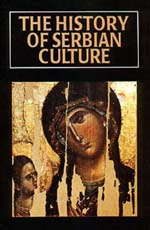 A short history of Serbian culture, including medieval architecture, traditional attire,  photography, painting, and many more.